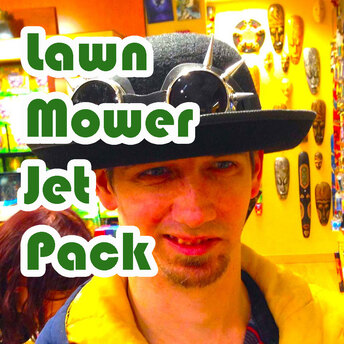 Comprised of vocalist and lyricist Peach (science ficiton author Rodney C Johnson) and instrumentalist Oswald Knox, Lawnmowerjetpack is musical weird-introvert absurdism.  With a lyrical focus on 80s cartoon villains, Star Trek, and Peach's romantic misadventures and music that variates between death metal and alternative rock, Lawnmowerjetpack is not for the sophisticated or discerning.

Factoid: all vocals for Lawnmowerjetpack were recorded through one of those weird Windows desktop microphones on a stick.  You know the ones we're talking about.  It makes no difference.