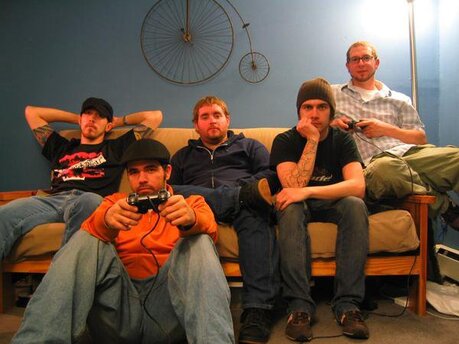 Boys From Recreation Park were a Connecticut-based pop punk band that existed from 2003-2007.  They were named after an infamous 1950s street gang in Kalamazoo, Michigan.

Formed by members of the 90s Connecticut hardcore scene, "Rec Park" played catchy, fun pop punk songs and self-released two albums, 2005's "A Good Time Had By All" and 2007's "These Songs Remind You Of Simpler Times", as well as the 2004 "You're A Handsome Devil" demo.

The band played out extensively, generally to single or double digit audiences.  Their crowning live achievement was playing a sold-out ska festival at The Webster in Hartford and everyone leaving the room two songs into their set.

The band unadvisedly started out with brothers Charlie and Marc on vocals, was briefly fronted by Tim Leonard from Invocation Of Nehek/Intercourse, and finally brought Greg Brayman (The Soul Merchants) to sing.

The band dissipated in 2007 before releasing their second album.